The differences in the west and east are interesting to say the least. Most would agree the western conference is better than the eastern conference. However, scoring is higher out east (by about 10%) and the west is about 5% better than the East. So in order to put the two conferences on an even foothold I made every point in the west worth 1.15 eastern points. Now I personally have a problem with this choice, but I figure it's adequate enough. Then I plotted the results below in a histogram (it's hard to two histograms on the same plot well), but the curve represents the data quite well. 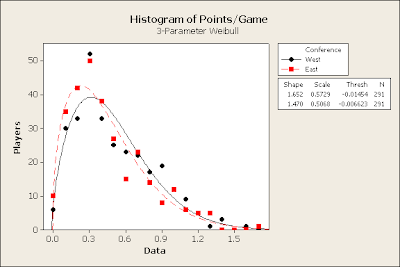 The western curve is significantly different from the eastern curve. You can see that the west has quite a few more players in the 0.4-1.2 category, whereas the east dominates the 0-0.3. In other words the East is not as good as the west because it has more marginal players. Basically the west has more depth: better 2nd powerplay unit, better 5th and 6th defenseman etc.

I looked into goaltending as a possibility, but both divisions have the same save percentage.
Posted by JavaGeek at Friday, February 02, 2007