Sometimes you look at a leader and wonder: are they really that good. Lundqvist was the best goaltender last year based on shot quality neutral save percentage and this year he's ranked around 15th, not bad, but not the best. Backstrom is ranked first (as of the weekend, Feb 4. - allowed 4 goals on 35 shots on Feb. 6) with a .933 SQN%. For those who are not familiar a shot quality neutral save percentage is a save percentages based on expected goals rather than shots (shots determine how many expect goals, PP shots have a higher percentage of going in for example). Recently I've been sorting teams by save percentage in different situations and found that my opinion on who is the best goaltending team better correlated with PK save percentage as opposed to even strength percentage (goalie skill more important on the penalty kill - this makes sense). Technically speaking you want to be good at both: PK and EV, but sometimes skill or luck changes the results. Below is a graph of SQN% vs. PK%, the ratio should be 1 to 1, PK% = SQN%, but the regression tends to an average a bit so it's more like SQN% = 50 + 0.5*aPK%, this makes sense as players appear to be "regressing to the mean". 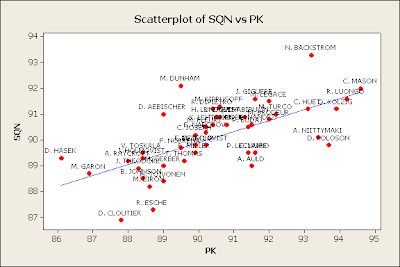 What I find interesting is Backstrom is doing amazing, but his results don't mesh with that of Luongo, Kolzig and Huet who have similar PK%'s, but worse SQN%'s. Cloutier is better than his 0.869 rating would suggest as is Esche. Dunham has been bit lucky and Auld with an excellent 0.915 PK% has done poorly at even strength. You can make your own concussions based on these results, but this is a tool I use to try and figure out to some degree if a player is lucky or actually good. Mason seems to be actually good, of course there are many other indicators that could prove otherwise.
Posted by JavaGeek at Tuesday, February 06, 2007