I don't understand why New Jersey desperately wanted Kovalchuk so bad, but it looks like their benefits may be offset by cap issues caused by Kovalchuk.

For those who don't know:

...the Devils iced a roster of 15 skaters and two goaltenders in a 3-1 loss to Pittsburgh [Monday October 11], many are wondering if the NHL should step in and slap the team for violating the CBA; if what the Devils did with their roster because of the salary cap can be deemed good for the game. [Yahoo]

I'm not one to care what sort of things the NHL does to punish the New Jersey devils - anything monetary is just part of doing business for them and the team has already lost enough: the game.

However, I do want to comment on what effect these sorts of things have on the probability of winning. I did a study a couple years ago that showed that whether a player got more or less ice time in a game their absolute number of points received dropped (if they got less ice time it's because they didn't have enough time to get the same number of points, and if they got more time it was because their scoring rate fell due to fatigue).

For the intent of this explanation I will assume the simpler situation: points are constant for each player with respect to number of minutes played. Which means if you increase a players ice time their scoring totals for that game on average are constant.

How does this affect New Jersey?
Normally when a player is injured a replacement is used. In this case New Jersey couldn't afford the replacement. So not only did New Jersey lose the benefits of having Volchenkov, Pierre-Luc & Rolston they also couldn't fit marginal players (who also get points) to contribute at least a little.

Actual Cost:
The loss of Volchenkov [0.22 points/game], Rolston [0.5 Points/game] & Pierre-Luc [ 0.1 points/game] for a total of 0.82 points per game (not that much different due to Pierre-Luc being more of a fighter than player and Volchenkov's inability to score).

Presumably goals against will go up a little with fewer skaters, lets assume it is half the effect of offense (conservative estimate) or about 0.15 goals.

Let's use New Jersey's scoring numbers from last year for demonstration purposes: 2.7 GF/gp & 2.3 GA/gp and won 48 games (59%). The new numbers would be 2.4 GF and 2.45 GA for an expected winning percentage of 49%. So in effect New Jersey goes from being an excellent team to being below average.

Also, I think these estimates are conservative - effects could be much higher. Study this is based on was assuming small changes to icetime, not 20% increases.
Posted by JavaGeek at Tuesday, October 12, 2010 No comments: 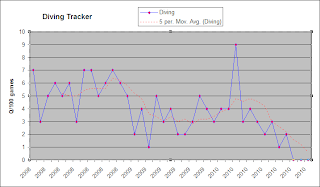 Does anyone believe there are actually fewer players diving though?
Posted by JavaGeek at Tuesday, October 12, 2010 No comments:
Newer Posts Older Posts Home
Subscribe to: Posts (Atom)