I like "bookie" predictions due to the fact that they are backed by cash instead of just hot air. That being said, even bookie predictions have systemic problems or even systemic biases. Some can be fixed others cannot. Certain teams attract money from betters and other simply cannot. Due to the fact that very few people cheer for Nashville it may in fact suffer some devaluation.

However, some predictions are just stupid. For example, the Atlantic division last season was a joke, not only was Philadelphia the worst team by a far margin. Overall the division was below average or average. This season Pittsburgh doesn't get to play Philadelphia 8 times to stack their stats as Philadelphia will quite possibly make the playoffs. The bookies from the above prediction state that the Atlantic division will go from below average to the best division by a large margin in a matter of one season.

So, what I did is I adjusted the bookie's standings so that all the divisions performed the same this season as last season.

When I look at those standings I have a hard time finding fault with anything on there [except the four Northwestern team's making the playoff and only one central team and all four Northeastern teams making it].

I find it interesting either way...
Posted by JavaGeek at Friday, September 28, 2007 2 comments: 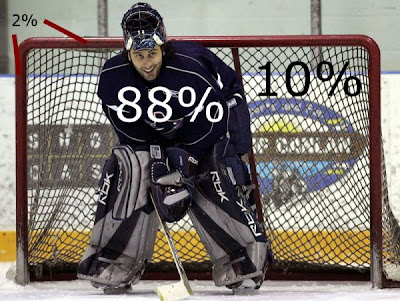 Of course this is assuming goalies and teams don't adjust to the new system. Goalies would attempt to cut off shots even more (quite an adjustment for a goalie like Luongo).
Posted by JavaGeek at Tuesday, September 25, 2007 2 comments:

My own formatted play-by-play

Ok, this is a work in progress. Basically I want something that has the option to hide certain events and show other ones. If you click on SHOT, BLOCK etc. it will hide or show those events. This is really nice as you can break the play-by-play into just shots (what I care most about), or just face-offs. In the long run, this is just a great way to see if I have recorded the data correctly and where any problems are.

Also, I've color-coded the shots based on the likelihood of them going in. I wasn't sure if this would work, but it really gives you an idea of the flow of the game. Bright red = very good shot. Black goal = bad goal (low probability of going in).

I plan on publishing these (possibly live if I can figure out how to write a program that will download and parse them live). They are more in tune with the old style.

I will likely attach a game summary part onto the top, which includes the goalie's save percentages and who scored and got assists. And a few other details. I also find the information a little overwhelming in this format so I'll be moving it around to see if it works better.

I'll update this list "regularly". Only includes games that the NHL published information for (obviously).

There are a significant number of shot from the wrong side of the ice in the NHL data I've assumed any shot >115' feet was a mistake and should have been recorded on the other half of the ice. Hopefully the NHL gets that sorted out before the beginning of the season.

For the most part I have the new NHL format in my database.
Posted by JavaGeek at Sunday, September 23, 2007 No comments:

Alan Ryder has found systemic bias in the shot quality data leaving the results showing problems with the data. It is bet summarized by Ryder himself:

I have been worried that there is a systemic bias in the data. Random errors don’t concern me. They even out over large volumes of data. I seriously doubt that the RTSS scorers bias the shot data in favour of the home team. But I do think that it is a serious possibility that the scoring in certain rinks has a bias towards longer or shorter shots, the most dominant factor in a shot quality model. And I set out to investigate that possibility [Shot Quality Product Recall].

I did a rather simple way to fix the problem. I did a regression on SQ results for all games based on two factors: team shot quality and stadium shot quality or [RTSS shot quality]. This simply calculate how much off the RTSS scores are from the standard [how the team normally performs]. Preferably we want no effect from RTSS scores so all those variables should be 0. I found a rather long list of biases, most of them small, including: Calgary, St. Louis, Columbus, Chicago, Phoenix, New Jersey, New York Rangers, Philadelphia, Buffalo, Carolina, Washington. I have deliberately over chosen, so that list likely includes teams which are simply randomly different as opposed to actual bias, but it doesn't matter. Ideally, I would want to incorporate these issues into the model directly, but the shot quality model is time consuming to build and once you get the variables you have to go through the hassle of calculating the percentages for all 7000 shots.

I'm curious what the RTSS turnover is. That is to say, I wonder if the bias last year will be the same this year.
Posted by JavaGeek at Friday, September 14, 2007 2 comments:

Along with the Jersey changes it appears the NHL wanted to make their reporting of games a little more "user friendly". Hopefully they've managed to make sure all the files are the same, although I suspect they'll still have the French versions.

Positives:
+ There is ON ICE information for every event!
+ Nice break down of shots per situation.
+ Moved goalie info to Event Summary
+ Missed shots have distances.
+ Every event has a zone for where the action occurred.
+ Cloutier seems to be himself [3-10] [couldn't help myself]
+ Break down icetime by situation [NHL publishes 4v3 time and 5v3 time].

Negative:
- This could take weeks to figure out formatting to get information into my database
- They disabled left clicks for who knows what reason.
- The files are HUGE.
- Play by Play includes the header every so often, but doesn't explain why [looks like it's for com. break]
- Still don't include the X-Y cords. for shots.

Overall I think I can work with these, formatting looks simple and consistent.
Posted by JavaGeek at Thursday, September 13, 2007 4 comments:

Here's the details on this season's schedule. Trips = number of days the team will be on a plane traveling between cities for an NHL game. KM = total kilometers to travel over the course of the upcoming season. KM/trip is just the average trip distance.

You can see the NHL does a pretty good job balancing the schedule. Also, there is a significant relationship between average trip length number of days on a plane.
Posted by JavaGeek at Wednesday, September 12, 2007 No comments:

When I go through the NHL schedule for the first time there are two things I look at first: distance traveled and how many back to back games the team plays. I also look at back to back games from the perspective of the team who gets to play the tired team.

Typically a team sees about 12 back to back games and plays against 12 teams who played the day before. Nashville lucked out this season. They are scheduled to play 24 games (30% of the season) against tired teams [listed to the left] and play only 10 back to back games themselves.

Generally I argue that these games have a cost of about 5% in terms of winning percentage or 0.05 wins. So Nashville loses 0.50 games in the 10 games they play back to back and gains 1.2 wins in the 24 games they play against a back to back team. In essence the NHL has given Nashville 1.5 extra points. (this is worth approximately $700,000). Of course this isn't huge, but essentially Nashville has a 1.5 point advantage before the season starts.

It's interesting, but the majority of these games are in the first half of the season, possibly to get the team an early lead and to attract attention to the team. For example, Nashville plays tired teams for a whole week: Dec 6 to Dec 13.

Last season the NHL was very good at making sure back to back games were scheduled fairly and the largest difference was 5 (Col, S.J, NYI)
Posted by JavaGeek at Wednesday, September 12, 2007 1 comment:


James Mirtle posted a nice poll, which asked people to pick the teams that are expected to make the playoffs. I simply created a nice graphic for the predicted standings based on this poll. This graphic was made when there was 330 votes.
Posted by JavaGeek at Wednesday, September 12, 2007 No comments:

I'm a big believer in "shot quality" as many readers have likely noticed. If players have an impact on the quality of shots a goalie sees, then they should affect how many pucks the goalie stops. If a goalie generally stops 90% of shots then a player who makes shots twice as easy to save should have a save percentage of 95%. Of course players have a much smaller impact of save percentage than goalies do.

In order to see if players can affect save percentage I did a season vs. season regression: I check if the players who out performed in 2005-2006 continued to outperform in 2008-2007. If there is a significant relationship between the two seasons then obviously players impact save percentage.

Note: this data only includes even strength shots.

However, this data is worthless for predicting how a player will do next year due to the large amounts of variability. For example Crosby had a n excellent save percentage this season of 0.930, this system says he'll likely perform at 0.919 given identical goaltending as last season, however he could easily do as poorly as 0.890 with bad luck or as well as 0.950 with good luck. A 2% difference in save percentage on 600 shots works out to about 12 goals over the course of a season. So this large range of possible save percentages for players can have a large impact of a player's plus-minus, often due to just luck.

Results
Any way most people will want to see the results

The Falconer from Do The Thrashers Have Large Talons?. Requested I do a little summary on the goaltenders from the Southeast division. I figured I would post it here for all to see.