Stuart was traded for two RFA's (1st round pick Kobasew and 6th round Ferrence) last season. LA practically gave him away for a third round draft pick from Detroit this season. I have a strange feeling Stuart wont be coming back to LA in the summer...


As an aside, I recently wrote an article about Stuart's winning percentage. Now Stuart has a real good team to play on and a chance to improve his winning percentage, but don't count on it. Detroit should be able to better protect him and use him less compared to his past teams (Stuart will probably rank 4th on Detroit's depth chart when the team is healthy) and this should help him improve his game.
Posted by JavaGeek at Wednesday, February 27, 2008 No comments: 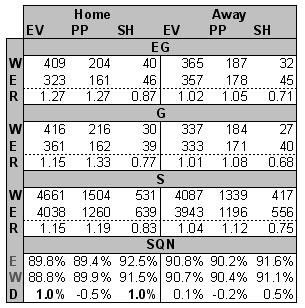 Note: The data is a couple weeks old.
Posted by JavaGeek at Wednesday, February 20, 2008 10 comments:

First off, this trade appears to be started by the Hurricanes. If you take a look through all the NHL teams at this time, ’s top defenseman has the fewest points for a team’s top D-man (12). In fact Commodore is 1 of 4 defenseman with 12 points. The next worse team’s top D-man has 17 points and most teams have 1 defenseman who has at least 24 points. Carolina was in desperate need for a offensive defenseman. The problem for , not many teams give up their offensive defenseman very quickly. If wants to have a good chance to make the playoffs they need a decent offensive defenseman. Carolina asked for Corvo, Ottawa then asked for Stillman. The rest of the deal is simply making up for lost players (Ottawa needed to replace a defenseman and Carolina needed to replace a forward). Neither player is really a critical part of the team.

A lot of people like to point to one team and say they won in this trade, but in this situations both teams got what they needed without giving up something they really needed to keep. Carolina needed Corvo and Stillman was ranked 4th on the team in points, he isn't the most important part of Carolina's offense. Corvo, also has more points for Ottawa than the top two Carolina defenseman combined, but Ottawa still has Redden's offense and Meszaros isn't too far behind Corvo.

Either way it was a good deal for both teams. Like most trades should do, it made both teams better off.

Like last year I have my trade page up and running again.
I have also added a new feature that shows what players played in which games in a simple graphic format that makes it easy to see who got injured when and how long they were out for. It gives you an idea how many injuries a team has had. You can find it here.
Posted by JavaGeek at Wednesday, February 13, 2008 No comments:
Newer Posts Older Posts Home
Subscribe to: Posts (Atom)