I often have people say that my statistical measures of shot quality don’t factor in whose stick they are coming from. That is to say it makes a huge difference if Tanguay takes a shot over say Josh Green given the same variables: distance, rebound, power play etc. However, I am going to make a short little explanation that this is probably not the case and that good players score because they’re in the right place at the right time and get their shots on net. Then I am going to list players who have significantly outperformed expectation over the year and those who have done a lot worse.

How can I show that outperforming expected goals is the result of luck and not skill? Year over year correlations are the best way. That is to say, do a regression on how well compared to expected results a given player did in 2005-2006 and compare that to identical player in 2006-2007. If skill is a significant component of the data then we should see that good players in 2005-2006 are good in 2006-2007. If this is not the case then there are other reasons (most of which can be attributed to luck).

The graph below is a scatter plot of the Z scores for each year. Z scores simply allow me to normalize out the quantity of shots and create a unitless measure of skill. The amount of variability in the data is about 5-10% greater than I would expect, assuming binomially distributed data, which is likely the result of problems with the shot quality model. 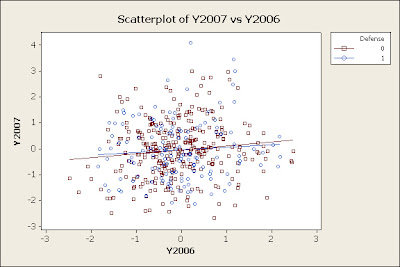 There are small signs that there are players who can outperform expectations. There are a few regressions that are significant at the 5% level, but these regressions explain 1% of all the variability, so I will consider that other influences, such as luck, have a larger effect on the results. I’m not saying that players can’t outperform expected goals; I’m just saying that outperforming expected goals is more likely a sign of luck than a sign of skill.

The team listed is one of the team’s the given player has played on. It just helps me figure out who the player is. P = F:forward, D:defense, G = goals (not empty nets), D = difference between actual goals and expected goals, Z = z-score of the difference using binomial standard deviation. [sqrt(npq)].

The Z-score represents a unitless value about how much better (or worse) a player did than expected. It just creates a nice value to sort the list by. The D value is the absolute number of "unexpected" goals.

Below I’m going through the best and the worst on the list to demonstrate that it makes sense with the extreme values and that skill doesn’t seem to be the reason players come to the top of the list or the bottom of the list.

Explanations of the top 10.

Explanations of the bottom 10.

All this said, being lucky this year doesn’t lower your chances of being lucky next year, so any prediction could be wrong simply because they could be lucky two years in a row (or unlucky for that matter).

I am planning to go through the players and adjust assists based on how lucky the scorer was all season. So, an assist on a luck player will be worth less than an assist on an unlucky player. So Daniel Sedin’s assists on Henrik Sedin’s goals will be worth more than assists on Drury goals. I’ll then see if the results make sense.

There are a gazillion factors that go into how a goal is scored that doesn't account for in your shot quality measurement including who shot the puck, how hard was it shot, how accurate was the shot, who and how was the play set up, who the opponents were, was it deflected in any way, was the goalie screened, and even who the goalie was. All of these things factor into scoring goals but the majority of them are not accounted for in your shot quality measurement and thus you are likely attributing differences to luck when you aren't attributing it to these other factors.

Look at it this way. A 6 foot shot could come on a breakaway, could come on a cross crease pass, or it could come on a scramble in front of the goal with the goalie lying flat on the ice. The chances of each of these going in are likely vastly different and you I believe you would rank them all the same. Do you factor in the goalie or do you rank those shots the same regardless of whether Dan Cloutier or Roberto Luongo is in goal?

I just think it is rediculous to assume that Souray's ability to blast the puck on a one-timer has little or no effect on his ability to score goals. Same for McCabe, another guy with a good shot from the point.

Assume: An axiom or statement, not necessarily true but put forward and taken to be true to enable further analysis of a hypothesis

I just think it is ridiculous to assume that Souray's ability to blast the puck on a one-timer has little or no effect on his ability to score goals. Same for McCabe, another guy with a good shot from the point.

First off I didn't make that assumption, I've been working off the opposite for a long time (expected goals != actual goals at the individual level). I provided some reasonable evidence that luck dominates skill and therefor outperforming expected is a better indication of luck than skill.

A better offensive defenseman will be more accurate and therefor get more shots on net (miss the net less), so accuracy is accounted for to a certain extent. However, this is irrelevant, the fact that there is no correlation between doing well this year and doing well the in the next means that it is 99% more likely that Souray will play at his expected goals next year than the alternative: playing at his actual goals.

That said, players can outperform expectation, I'm not debating that, but luck is by far a bigger chunk of the information.

You would need a lot of skill to make the opposite conclusion: skill dominates luck.

What is more crazy of a conclusion about next year's goal scoring by Souray?:
A. He will be the league leader two years in a row and score 25 goals
B. He will be a good offensive defenseman and score 13, his historical average.

I don't think I can convince you though, that's fine.