This article assumes that:

For players that the team has filed an LTI exception, the team is allowed to exceed the cap by up to the amount of the injured player's salary with as many replacement players as needed, provided that when the injured player is activated the team comes into compliance with the cap immediately.

In this article I am only referencing situations where the LTI (long term injury) is in fact a permanent injury where there is no possibility to return. This means that while the salary counts towards the cap it also increases the cap by the injured player’s salary, which is equivalent to the salary not counting towards the cap and the cap being unchanged. 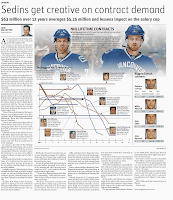 There have been a number of extremely long contracts signed in the NHL since the lockout largely due to salary cap rules. The Sun had an interested article written about precisely that on (image to the left). The article doesn't provide an explanation why teams would sign these contracts or why these contracts are able to reduce the salary cap hit. The first long term contract was signed by New York Islanders and Charles Wang was criticized at length by fans and sports writers for such an irrationally long contract. Even after DiPietro’s significant injury(s?) other teams are now singing very similar contracts with their players. Why would teams do what many outside of the hockey business community think are irrational?

Let’s assume a very simple world where two things are true: player has the options to sign a very long contract or a 1-year contract. We'll also assume, for simplicity's sake, that there is no inflation, or no price changes from year to year. As a result if a player is just as good as they were last year then they will receive the same salary as they did last year.

In contrast imagine if the Sedin’s decided to sign 1 year agreements for 12 years instead, how much they would require for the 1-year contract to be equivalent to the 12 year contract?

Of course, the player can choose to insure this lost income (so long as they can find a willing insurance company who wants to risk millions of dollars on a dangerous sport). The willing partner could insure the player lost income if the team chooses not to sign him due to injury. The player of course would have to pay a premium to do so, but the insurance could guarantee his income for 12 years as the long term contract did automatically.

Below I have attached a table that summarizes these two worlds:

P(active) = probability the player is not injured
- Note I used a 5% chance the player has a career ending injury, this might be a little high, but it makes the numbers look better.

Money = Average amount of money paid by the team to that particular player.

Ins. = Insurance – The average cost associated with finding a replacement player when the player has a career ending injury.

In the 12-year contract the team pays both replacement player salary (if the signed player is injured) and the injured player’s salary. In the 1-year situation the team only pays the non-injured players salary, if the player wants to insure their earning that is their problem. To make both situations equivalent (player guaranteed $63 million after 12 years) the player should buy an insurance policy for their lost earnings.

In my example, a 12-year contract results in the team having to pay:

$14.7 million to replacement player due to injuries.

However, the $14.7 million would not matter in terms of cap concerns though…

In my example, a 1-year contract results in the team having to pay:

$19.2 million to replacement player due to injuries.

$82.2 million net cost, but entire amount counts towards the cap.

The team who chooses the longer term contract not only pays essentially the same total cost for player salaries, but in the long term contract the injury replacement do no effect the cap, whereas the replacement do effect the cap in the short term contracts. The difference is essentially who is buying the insurance. If the team pays for the insurance it is not charged against the cap, whereas if the player buys the insurance it is charged against the cap. I’m not sure if players actually buy these injury insurance policies or if they just self insure the risk.

My belief is that these contracts are bad for the NHL in general. I think it create stagnation in teams. These rules make teams boring as there is very little change. It means that the stars will stay in one place for a long time without the possibility of going to a different team. Player’s however benefit significantly from these agreements: they have guaranteed wages and know where they will be living for the few years and can settle down (buy and house, move kids to a new school they might graduate in). That’s not to say players wouldn’t be nervous about these contracts. Specifically they would worry about management changing priorities and the being stuck in the NHL’s worst team for 12 years.

I still think the costs associated with these contracts are a turn off for many General Managers. Unless the General Manager has an unlimited budget it’s hard to a owner asking to sign off on a $63 million dollar contract (that could backfire).

I think there should be enough natural disincentives to these contracts to keep them becoming the norm, but teams who sign them will be rewarded with the extra cap space they need to sign better players.

I think one of the worst things about the long term contracts is the fact that you're going to be seriously overpaying at the backend of the contract. Sure you may get a bargain at the front end, but I find it hard to believe that they'll balance out.

Look at Hossa's contract. How many years is he actually going to be worth $5MM + a year? The guy is already 30 years old.