The 2006 in long forgotten, but I was looking through player stats and arguably Chris Pronger is the most dominating player in the NHL at this time (certainly in the top 10), but I noticed he was picked second to Alexandre Daigle. Daigle, as most people know by now, hasn’t done all that much in the NHL. Daigle is averaging half a point per game and recently played a number of games in the AHL and is now playing in a Swiss league. Of course I found all this out by looking at HockeyDB’s nice draft pages. What I noticed is that even low pick players were some able to get into the NHL and do well. For example Pavol Demitra (picked 227th) is averaging a point a game and Kimmo Timonen (picked 250th) is averaging 0.85 points per game. So I was wondering if teams could actually determine a player’s skill through the draft or if it’s mostly guess work.

Before going any further I should note I rescaled defenseman's points by 1.7 so they would fit in the model (this is a number I found analyzing assists), I could’ve created two separate models this just simplifies the models. Also I am only measuring offense so defensive players will look bad, but I’m assuming their randomly distributed so it shouldn’t have a significant effect (teams substitute defense for offense equally in high and low picks).

The first thing I wanted to know is which draft picks are playing in the NHL from that year. So I deleted all players with less than half a season of games (less than 40) Shows the obvious occurs: that is to say teams prefer to use high draft picks over low draft picks. I don’t think you needed a mathematical analysis to figure that out, but at least it agrees with the intuition. The graphs below show a histogram of pick number after I deleted the picks that didn't play in the NHL enough. Basically each bar counts how many picks in the given range who played a significant number of games in the NHL. 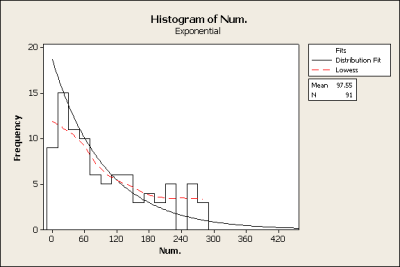 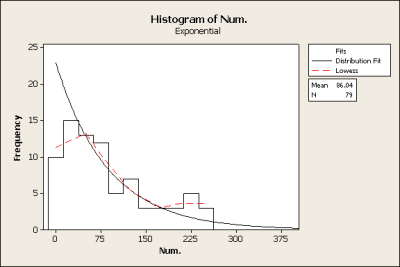 But the real question is can teams pick a winner. The answer to a certain extent is yes and well no. For example if you look at the first 100 draftees, you get correlation equation something like:

Problem is after the first 100, the relationship is much less clear and in fact can have an increasing trend. 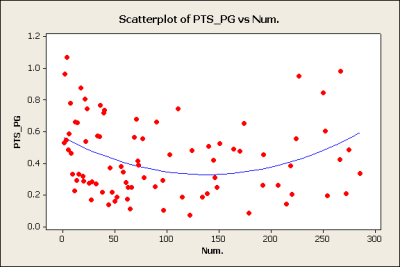 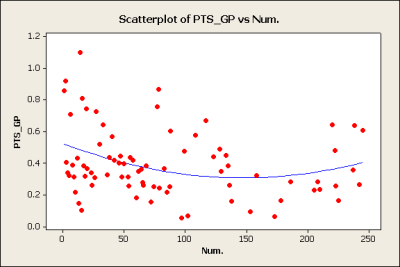 Why might this be? It would appear that picking is neither random or exactly negatively correlated to pick order. One theory is that good teams find players no one else does knowing that no one knows the player they can postpone this pick to a later round. There are only a few players who actually made it to the NHL and did well so there are few players to study this with, but teams who picked better than average players in
late rounds (1992, 1993) include:
, , (2), , , (2),

Just because a team picked a good offensive player doesn't mean they're great for example many readers might not know who their "good pick" was because he played only 57 games: defenseman Ilya Byakin, who has been successful in Europe.

Also if you look at both scatter plots you'll notice the quadratic regression line have the minimum at the same value of picks or 150 (~ round 5).

This may suggest to some that some players who never get a chance would actually be good in the NHL. Naturally on the surface I agree that there exists a number of low pick players who could be amazing in the NHL, but for whatever reason they're not getting the opportunity. But I suspect those who don't make it to the NHL mostly do so because they lack the skills and possibly the motivation and effort. For example a player who was picked 250th overall might be discouraged and give up.

Anyway I bumped into this today and since I had a little time and haven't posted anything interesting in a while I thought I'd post something a little different. This could easily be done for other years in the same ways, I suspect it would have similar results.