In regards to:
One more stats rant:
wanna make a million dollars?

These are the results only for 2005-2006. I will collect the other data too, but I’d rather study this first, before I go further I removed two types of powerplays from these results: roughing and puck over the netting.

It doesn’t seem to make a difference [compared to question 1], as it’s 13% (less, but not statistically significantly less). (7.28 vs 6.44) They just get more penalties in general.

This can be done, reasonably easily to approximate, take powerplay opportunities and divide by total powerplay time (over the team). In other words someone else can figure this out. The quickest approximation: 8103576 seconds of powerplays in 14394 powerplays, which works out to about , now if you were to look at only powerplays where goals are scored this would be more complicated…

Basically goals after face-offs occur in an exponentially decaying pattern (with an initial lag due to near impossible scoring time) as seen below; this is the result of scoring following a Poisson distribution. 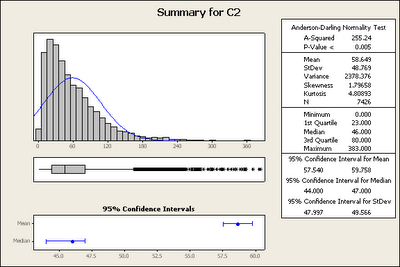 One has to remember that in hockey, an offensive zone win or loss just changes the amount of time to get to the net, so it should not effect the distribution significantly, but just the average. So it appears it takes about 7 seconds to get into the offensive zone from the neutral zone. You can see this graph, it has a few extra “humps”. Also much of "humps" come from the fact that there were only540 goals after icings, compared to 7426 goals (ok I'm missing a few). 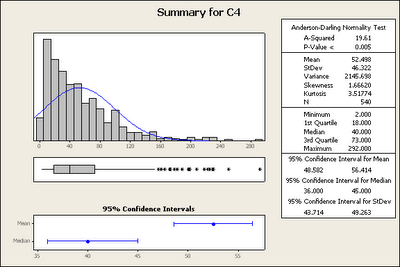 Depends on how good each team is, this is answered at Hockey Analytics in their in depth article: Poisson Toolbox

I’ll add it to my to-do list. I should add: studying post season is extremely difficult as teams play the same team four to seven times and a lot of hockey is determined by oppoenents.

Some of those 10 were just 'for examples' of subsets that might be worth comparing, such as east vs. west trends, or period vs. period trends. It wasn't so much about the answer to the question I asked, but these might be interesting subsets that may show different trends.

My question about 'icings' was really to think about the effect of not being able to change lines this year. Maybe it will show something against last year's numbers (though there's no rush to do it right now).

Now I could understand why a trailing team would have an edge (attacking vs. defending, perhaps), but comparing against pre-lockout results might show something. Also here is where a playoff comparison might be interesting.

Thanks a lot for the number-crunching. This is great. If you want to later, I would also be interested in a post about the structure of your data. Might help me understand what you're doing (or working with) a little more.