Everything you wanted to know about the Shoot-out

Edmonton started the season going 10-1 in the shoot-out (now they are 10-2), this event brought about an interesting discussion on shootouts. I've been holding back posting anything about shoot-outs primarily due to lack of data, but after two seasons (plus a bit). It got me thinking: what led to Edmonton doing so well? Was it all luck or was skill a big part of it.

Team winning percentage
The first thing I looked at was year over year comparisons: 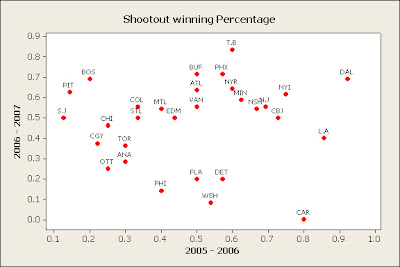 Looking at this without knowing any details it would appear that the shootout results are in fact perfectly random, you can sort of see some clustering in the middle, but other than that there are too many anomalies to make sense of anything. Let me however make a few key points:
1. LA: Lost Garon (80% shootout save percentage after 2005-2006)
2. Carolina: After the playoffs dumped Gerber and Ward has 1 win in three seasons
3. Florida: Lost Luongo
4. Philadelphia: switched to Niittymaki
5. Pittsburgh: started to use Fleury more often
6. San Jose: Toskala thankfully only played 1 shoot-out game in2006-2007 (0 wins in his career)

Remove the above points and you have a data set that has so much more structure. Of course I could probably think of good reasons to exclude every point on this graph, I'm simply trying to show that there are some key points that shouldn't be included because too much changed. 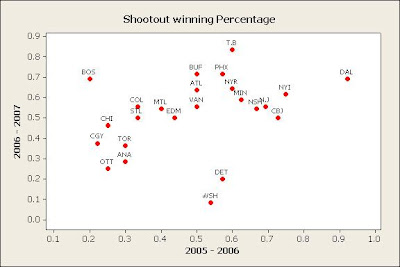 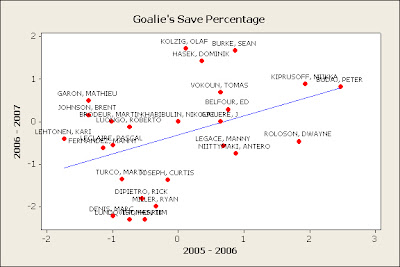 This regression to the mean is quite small, as it is saying that half of the average goalie's save percentage results are due to luck the other half come from skill (in a given season). [Individuals could be quite different]

Save percentage By Round
Now there are a few things to keep in mind:

In general later rounds are easier to stop. So if a goalie plays until the 7th or 8th round his numbers should be better than a goalie who only sees the first two shooters.

Shooters:
On the surface it would appear that shooting percentage is all luck as there is no correlation between years. That being said, the graph below could just be the result of playing different opposition. 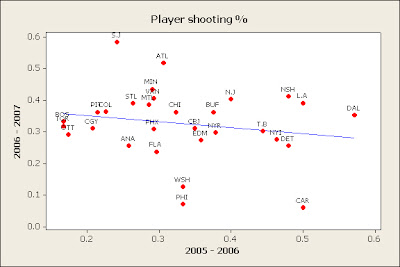 What is a guy like Garon worth in just the shootout. Well assuming average number of shootouts (10) he wins you an additional 1-2 points (or about $0.75M - 1.0M). [Based on this image , 35% shooting percentage and 80% save percentage]. Of course if you're Edmonton and discovered a way to get to the shootout 3x as often as expected, well then Garon is even more useful.
Posted by JavaGeek at Thursday, December 20, 2007